The city of Baltimore can all too often get a bad rap from most people. The first image that often comes to mind for anyone outside of the city tends to be that of The Wire, but Baltimore has so much more to offer outside of the typical urban sprawl. With Lucky Home Buyers, realty consultants in Towson, MD, we are going to look at a few of the safest neighborhoods in Baltimore City.

In northwest Baltimore, Maryland, along the Western Run, Cheswolde is a quiet residential community. This neighborhood consists primarily of single-family homes and garden-style apartment facilities. Cheswolde is home to many Orthodox Jewish families who enjoy proximity to many synagogues and other Jewish resources.

The history of this area dates back to the 18th century and has undergone many changes to become the residential district it is today. What was once an extensive farmland eventually became developed in the 1950s and 1960s because of Baltimore’s northern expansion.

Residents of Cheswolde enjoy a relaxing, family-friendly suburban atmosphere paired with immediate conveniences of the city. Also, the nearby Western Run Park bisects the community, bringing natural beauty to the area. Although Cheswolde has little in the way of bars and restaurants within the immediate vicinity, locals can head west to Reisterstown Road for energetic nightlife, exceptional dining, chain restaurant, and a variety of other amenities.

Cheswolde tops our list of the safest neighborhoods in Baltimore with violent crimes per 100K people coming in at 249 and a property crime rate of 1,026 for 2020. 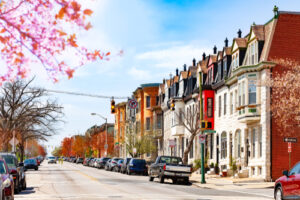 Roland Park is the first planned suburban community in the nation. It is characterized by single-family Tudors, craftsmans, and colonials and can be found alongside townhomes and apartments. Residents are drawn to the top-rated public schools, elite private schools, excellent restaurants, and a variety of home styles.

Guildford was developed in the early 1900s, alongside Roland Park, by the Roland Park Company. The community features stately mansions, single-family properties, cottages, detached homes, all set amongst mature trees and period streetlights. Residents enjoy the breathtaking architecture and proximity to the College of Notre Dame, Loyola College, Johns Hopkins Homewood campus. As a result, this area is home to many students and educators.

The Roland Park-Homewood-Guilford community ranks number four on our list of the safest neighborhoods in Baltimore. Violent crime per 100K people comes in at 464 and property crime is 2,104 for 2020.

Situated approximately 6.6 miles from downtown, Baltimore’s Wakefield neighborhood is near Gwynn Falls and North Forest Park Avenue. Thanks to its proximity to Gwynn Falls, this community boasts gorgeous views of heavily wooded areas. The neighborhood itself comprises primarily apartment complexes.

With its position on the outskirts of Baltimore, a quiet atmosphere, and beautiful scenery, Wakefield is the ideal place to live for those who prefer rural areas but need to live close enough to commute into the city. Residents of Wakefield enjoy easy access to the Carrie Murray Nature Center, Outward Bound, an abundance of biking and walking trails, and the annual Herb Festival.

In South Baltimore, Riverside hosts a mix of apartment buildings and row-house styles. The neighborhood lies just south of Federal Hill and is home to roughly 9,000 residents. It is a very popular community for both young professionals who are new to the area and homeowners who’ve lived in Riverside for generations.

Riverside’s center point is Riverside Park, which also includes the Baltimore Museum of Industry. The neighborhood’s southern region corresponds to the Port Covington district, which is the site of the Under Armor Waterfront HQ Campus, The Baltimore Sun, and the Cruise Maryland Terminal of the Port of Baltimore.

Officially registered as Riverside Historic District, Riverside is on the National Register of Historic Places. Residents of Riverside enjoy easy access to local retail, restaurants, a neighborhood park, social leagues, playgrounds, and public transportation. Riverside ranks seventh on our list of the safest neighborhoods in Baltimore.

It should be noted that while Riverside’s overall crime rate is 26% higher than the national average, it is 50% lower than the city’s average. Violent crime per 100K people comes in at 658 and property crime is 2,537 for 2020.

At Lucky Home Buyers, we have over 25 years of experience providing win-win solutions to help homeowners get out of their sticky situations. Issues such as foreclosure, owning a burdensome property, probate, or anything else, we focus on providing you with a compassionate solution to your situation so you can continue to do the things you love.